The Italian holiday of Ferragosto, dates back to Roman times and has been celebrated in Italy for over 2,000 years. Originally it was celebrated on August 1st and it was the festival of emperor Augustus. He made it a day of rest for all of the workers who had been working so hard in the fields for the previous weeks. Eventually the Catholic Church got involved and moved this holiday to August 15th to include it with the Assumption of Mary.

In modern times, August 15th is still one of the biggest holidays in Italy.  The factories are closed for the workers to rest which makes it one of the most expensive times to travel in Italy.   The prices of hotels are usually doubled that week because they know rooms will be in high demand and most businesses and restaurants are closed as well.

Being from the South, August 15th is a time everyone returns to my town.  Usually there are about 4,000 people living in Muro Lucano, but over the summer people who emigrated return to make the population more like 8,000-9,000 people. Then after August 15th, everything goes back to usual with people returning to where they live. It’s almost like an end of summer for Italy.

From my childhood, I remember this was such a fun time. Every town had festivals during this time period so we would go from town to town. Each town has a different patron saint so there is almost a different feast to go to every day. As a young child, I remember being excited to go on all the rides. Then, as a teenager, it was a great time to get together with your friends, party, and be allowed to stay out really late.

August 15th was also a day to spend with your family. My father would wake us up very early, around 5:00am, and the whole family would take a day trip.  Remember, we were four kids in a little car with no air conditioning!!!! We would go to the Madonna di Pierno, a religious sanctuary that people from all over the region would come to see. We would pray, watch the procession and afterwards it would be time for a picnic.  So many people would be there, the hills would be packed. Everyone would have their picnic baskets ready and their blanket looking for the perfect spot.  It was a great day when you were able to find a space and set up your picnic in the shade of the trees and near the fountain that also had a little stream. 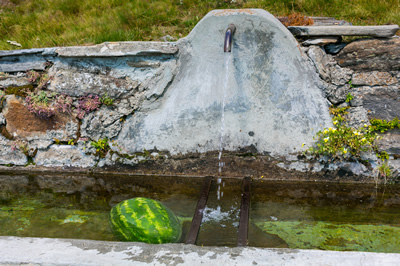 We didn’t have coolers so we would put our watermelon and anything else that we wanted to keep cold in the cool mountain stream. My mother would pack sandwiches, sausages, and some kind of pasta dish.   There would also be apricots in wine almost like a Sangria.   The absolute best sandwich to eat on the picnic would be, by far, was fried green peppers with provolone cheese.  It was so delicious and the peppers could only be found in the summer.

In my twenties, I moved to Tuscany for work and experienced Ferragosto in a different way.   There, people would go to the beach, not the mountains, to keep cool. Many people my age would really party and get crazy.  Our excitement then was to go for a swim at midnight.

It is also interesting to be in a city for Ferragosto because it is completely empty. Rome, for example, has only tourists. Everything is closed and there is no traffic, it’s such an odd feeling.

What I realized about Ferragosto is when you are young, you think the holiday is fun but also a little bit silly. As you get older, you realize how important these traditions are. I have come to cherish August 15th as I know this is the time that my childhood friends return to my town.    It is a time when everyone comes back from all the places they live and we can reminisce and pick up our friendship again. For the holidays of Christmas and Easter we spend it with close family, which is wonderful, but Ferragosto is bigger than that. It’s a beautiful holiday as it brings family and friends back together.